Italian food lovers have a new place, Eataly, where they can shop and eat authentic Italian food.

Eataly, a mix between an Italian grocery and a restaurant, opened in Chicago on Monday Dec. 2.

Mayor of Chicago Rahm Emanuel attended the inauguration of Eataly’s Chicagoan location on 43 E. Ohio St. and took a tour of the facility. He shopped each department and tasted some real Neapolitan pizza at the Pizza restaurant. At the end of his tour and after grabbing some fish and pasta, he reached the cashier and checked out.

Eataly’s two floors, include eight restaurants, a marketplace for fresh Italian groceries and housewares, a wine and cocktail bar, a Nutella stand, and a coffee bar.

The ceremony was a culinary experience that took its guests to try all the Italian specialties that Eataly offers. The store dedicates a department to each kind of food, including pizza, pasta, carne (meat,) pesce (fish,) and desserts.

Food stars and celebrities attended the opening. Lidia Bastianich, chef, television host, author, and restaurateur, said she thinks Eataly is going to generate some reverberations in Chicago. Also, she said people can find some of the best Italian products and some great local products at Eataly that combined with good cookbooks, will help apprentice chefs to cook real Italian dishes very easily.

“I think Chicago is a great city and it’s a great second Italy here in the United States,” Bastianich said. “The message is that yes we have these great Italian products and if you want to eat like in Italy there is a good prosciutto di Parma or a great slice of mortadella, but you can also cook very Italian with local ingredients.”

She said Eataly will open a cook school in February. People will be able to take lessons and use the products they can buy there, and cook them in the Italian fashion. Also, Bastianich will visit Chicago’s Eataly often and will give cooking classes herself. 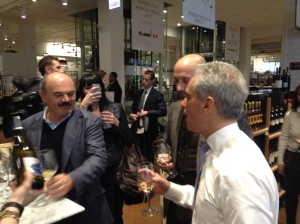 Her son Joe Bastianich,restaurateur, vineyard owner and a judge on the cooking shows MasterChef, attended the opening and said Chicago is a great location for Eataly because there is a lot of food production.

“Conceptually Eataly is about creating communication between people who make the food and people who consume the food. So, what greater place that the Midwest of America,” he said.

Oscar Farinetti, founder of Eataly, said he wants to prove that Italy is not just spaghetti and pizza, but lots more.

“After New York, we needed to be in Chicago,” he said. “We wanted to expand in the United States and so we arrived in Chicago. We found this amazing location and we though it will work.”

Farinetti said 60 percent of the products are directly imported from Italy. Fruit, Vegetables, meat, fish, and dairies, instead, are produced locally.

“Our team has been in Chicago for months and they studied local products. We have been humble and did not want teach anything: We just want to bring Italian excellence and combine it with local products,” he said.

He announced the next locations for Eataly will be Philadelphia and Los Angeles in 2014 and Washington and Boston in 2015. 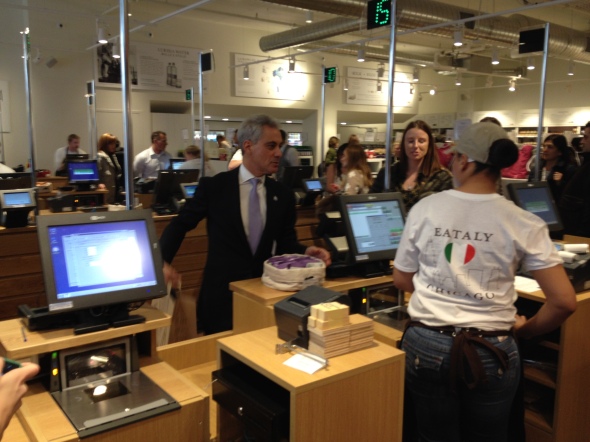